CA Taxpayers Spend Millions On Prisoners Sickened By Fungus. Why?

As read on Truthout.Org and originally written by Rebecca Plevin of New American Media, “Taxpayers Spend Millions on Valley Fever in Prisons”

“Californians are locked into contributing to the cost of treating state inmates sickened by valley fever. Since 2006, the state prison system has tried but failed to reduce the disease’s impact and price tag. California Correctional Health Care Services foots an annual bill of about $23 million for sending inmates with valley fever to hospitals outside the prison, guarding these patients, and for their antifungal treatments. That’s about what it costs to build a new school in Fresno County. Among those is Pleasant Valley State Prison in Coalinga where, in 2005, the prison’s valley fever rate was 600 times the rate of Fresno County….Inmates most vulnerable to the disease – including those with HIV and chronic lung disease requiring oxygen therapy – were sent to prisons outside the region…..Despite those changes, the rate of valley fever among inmates has continued to climb, mirroring an increase in cases throughout the state.”
Okay. Something is not adding up for us. Why would those housed in prison buildings experience illness at the rate of 600 times higher than other area residents from the naturally occuring soil fungi, Coccidioides immitis, which is the cause of Valley Fever?  What makes the prisons unique from all other buildings in the area?  If they have moved the immunocompromised out, why would the rate of serious fungal disease for the prior healthy inmate population continue to climb throughout the state prisons, when prior healthy people do not generally get Valley Fever beyond flu like symptoms? What would have changed to cause a naturally occurring soil fungus, coccidioides immitus, to be the reason for increasing illness? 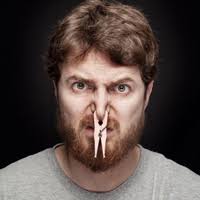 We smell a cover up for the causation of environmental illness and then shifting the cost onto the California taxpayer over the mold issue, yet again!!!  Given the unexplained questions as noted above, we are inclined to think it is the poorly maintained prison buildings themselves that may be making the prisoners sick from expose to indoor – not outdoor – fungi, while causing the taxpayer to have to pay for the illnesses that are directly being caused by poor building maintenance. It would seem to us that maybe the state of California does not want it known that their negligence is making prisoners sick.
It is true that Valley Fever causes illness from disturbed fungi in the soil becoming airborne. It generally only severely impacts those with compromised immune systems. However, poorly maintained buildings cause fungi such as aspergillus, penicillium and stachybotris to grow in confined environments making them easily inhalable for occupants and able to cause serious and expensive symptoms, similar to what is being reported as being caused by Valley Fever.  So, while the state of California could not be held responsible for illness caused by a natually occuring fungi in area soil, Valley Fever; they most definately could be held financially responsible for causation of illness from fungi in prisons that are poorly maintained. (Why were they planning on building a replacement prison for the Pleasant Valley facility?) These fungal induced illnesses would include asthma, hypersenstivity pneumonitis, aspergillosis, chronic obstructive pulmonary disease, and chronic inflammatory response syndromes along with a host of other acquired illnesses, such as fungal meningitis and cancer.
We happen to know that California likes to pretend it is scientifically proven that biocontaminants found in water damaged buildings do not cause serious illness in the general population.  The state has gone to great lengths to promote this false concept in policy for the purpose of limiting financial liability of building stakeholders, their insurers and other affiliates of the U.S.Chamber of Commerce, including the state of California itself.
The Regents of the University of California generate income off of the denial of causation of mold induced illness, while the taxpayer gets stuck with the greater, long term cost for the undiagnosed and untreated illnesses. The term for this is “cost shifting” and here is how it works: Under Senate Bill 899, California uses the American College of Occupational and Environmental Medicine “ACOEM” to write the guidelines that occupational physicians must follow when treating injured workers.  The ACOEM Mold Statement is used as claimed scientific proof that fungi in buildings do not cause illness in California workers.  The Regents make money off of the expert defense witness fees when UC employees testify that a building could not have caused the environmental illness and they use the ACOEM Mold Statement to lend false credibility to their words.
When the workers comp insurer is then able to run from financial responsibility because of the science fraud in policy lending credibility to the false concept that it is proven the building did not cause the illness, the CA taxpayer gets stuck with the tab for the greater, long term, cost of illness via social service and disability programs that the injured worker needs for survival.
So now, it is being claimed that prisoners are experiencing fungal disease solely from “Valley Fever” for some unexplained reason at an alarmingly higher rate than other area residents? It doesn’t make sense that the naturally occuring outdoor fungus is the sole cause for the increase while it is simultaneously known that the prisons are in an increasing state of decay. We are inclined to think there is a good possibility that the state of California just wants to pretend that they are not financially responsible for causing fungal induced illnesss in the prison population from poor building maintenance, just like they have aided workers comp insurers and other stakeholders to do to injured workers by keeping science fraud in policy over the mold issue – by hook or by crook.
This article was written by Sharon Noonan Kramer.  In 2005 Mrs. Kramer wrote of how it became a science fraud in policy that it was scientifically proven moldy buildings do not harm with the involvment of the U.S. Chamber of Commerce, ACOEM, a think-tank and a California politician.  The California courts aided the architects of the science fraud, Veritox, Inc., formerly known as GlobalTox, Inc., to frame her for libel over the writing; thereby aiding the fraud to continue in policy.  In March of 2012 she was incarcerated in San Diego, California for placing the direct evidence of the unlawful officer of the court conduct on the internet and for refusing to be coerced into signing a false confession of being guilty of libel.  While incarcerated, she became ill from the experience and was given a false criminal record for alleged civil contempt of court – which is not a crime.  The California courts have yet to accept any responsibility for their criminal actions and continued harassment of Mrs. Kramer — which is aiding to defraud the taxpayer by aiding the furtherance of financially motivated hate crimes against the environmentally injured, disabled and dying to remain in public health policies.